What Are Muntin Bars?

When considering what type of window to install into your home, it’s important to be aware of all the different styles and terminology so you know what to look for. Whether it’s frames, sashes or low-e coatings, there are a lot to know about window construction and design. Today we’re going to look at one specific component of a window: muntin bars. What are muntin bars, what do they do, and what do you need to know about them?

You May Have Muntin Bars Right Now

“Muntin” sounds like some obsolete 17th century term, but chances are your house has them right now. Muntin bars are the dividers between your window panes. If you have any windows divided into two, four, six or more sections rather than just a huge sheet of glass, those dividers are your muntin bars.

While we’ll most commonly associate the word with windows, muntins can actually refer to all kinds of vertical dividing pieces on a door, wood paneling, furniture or other similar items.

Where Did Muntin Bars Come From?

Like they might sound, muntins were in fact invented hundreds of years ago by early building designers. When glass windows first came into fashion, the technology wasn’t advanced enough for large panels of glass, so window makers would use muntin bars to join small panels of glass into one window.

They were structurally important as well, since outer walls sometimes couldn’t handle the weight of large glass panels and muntin bars ensured that the weight was transmitted vertically.

Is a Muntin and a Mullion the Same Thing?

While they kind of sound the same and are located near each other, muntins and mullions are two different parts of a window. The muntin bars are more like a grille, which divides the window panes into segments.

The mullions are thicker, and actually form the separation between adjoining windows. So if you see a grid-like pattern on the windows, those are the muntin bars. Ask any child to draw you a window and they’ll create a square sectioned off into four smaller squares  – those dividers separating each square are the muntin bars.

Muntin bars can really add some style and interest to your windows, but be sure you know what you’re getting. There are a few different options out there for window muntin bars.

Permanent muntin bars are found in modern double-paned windows, which have enough space between the two pieces of glass to house the muntins.

This gives you the same grid aesthetic, and the window is easier to clean without raised pieces that collect dust.

You can upgrade your existing windows to have a stylish grid design with removable muntin bars, which snap onto the inner sash with a hidden pin mechanism.

They’re reasonably durable, and since they’re removable you can still enjoy an easy cleaning process when needed.

Simulated muntin bars give you the divided-light look, but the muntins aren’t structurally integral to the windows. These windows include muntin bars on both the interior and exterior which are permanently adhered to the panes.

If you’re not sure whether your house has true or simulated muntin bars, it’s pretty easy to find out. If your house is older, with original windows, they are more likely to have true muntin bars.

The limited technology used by older windows actually joined each small pane together via the muntin bars, and from there, set them into their frame. Simulated muntin bars don’t perform the same workload, but rather give the divided-light look for aesthetic purposes.

Old Victorian or colonial homes are likely to have original windows with true muntin bars, but they’re prone to leaking and tend to get replaced.

Shopping for Windows with Muntin Bars

If you like the look of muntin bars, beware of using that term to shop for windows. Some major window manufacturers have done away with the old word, and simply use the term “grille” as a catch-all for muntins, mullions, dividers, and grid styles. 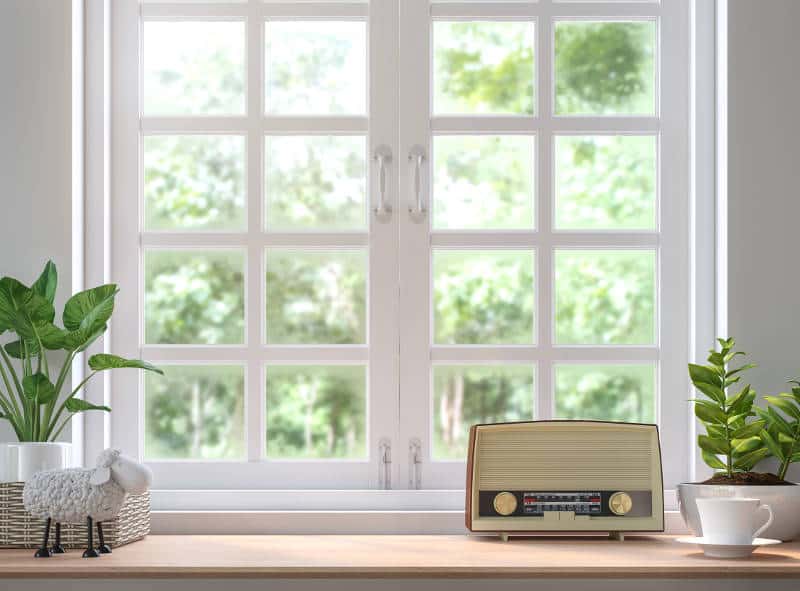 Since they are essentially non-functional on modern windows, if you find some nice windows sans muntins, you can usually pay an additional fee to request them added on as an upgrade.

Depending on what you want, the muntins may be thin metal or plastic strips inserted between double-paned glass, or affixed onto the exterior side of the glass.

You can even have custom windows created to have the look you want. Whether you own a historic Victorian house or an artistic contemporary home, you don’t have to shop from the rack.

You can get interesting and unique grid-style windows in all different patterns and shapes for your whole home, including specialty areas such as arches and bay windows.

Additionally, you can combine your grid style customization with energy efficient coatings, security shatterproof panes, and privacy tinting if desired.

How to Purchase New Windows

When considering new windows, it’s always a good idea to see some in person first. If you’d like to go the custom route, you would need to find a custom window installation in your area and get a quote.

Be prepared to give them information on how many windows are needed, measurements, and at least a basic description of what you’re looking for.

Can You DIY Your Window Installation?

If you have some time and skill with windows and home remodeling projects, you may enjoy replacing your windows on your own. However, most homeowners choose to have a professional undertake this project for them, since they will be up on current building codes for windows and be able to give you a solid guarantee of a tight, leak-proof seal.

Many DIYers have installed windows themselves in order to save money on a contractor, only to find later that their home suffered costly and dangerous water damage.

Muntin bars may technically be a thing of the past, but we still enjoy the charm and atmosphere that they provide. Whether you are enjoying historic original windows or modern simulated divided lites, you’ll always sit back and smile when the light comes in at each sunrise and sunset.

When homeowners in the Midwest need replacement windows, they turn to Feldco. They’re made of energy efficient vinyl and have many different muntin bar options to choose from. Get a free quote now and join 400,000 happy homeowners who trusted Feldco with their home improvement projects.